What does it mean to be a normal person? The role of subjectivity, environment and social norms on normality judgments

There is a huge debate concerning human normality. Have you ever thought about what makes someone normal compared to others? The other day, my partner reflected on normality - what does it mean to be normal? His ideas made me reflect on the subjectivity of this concept. Where does normality even come from?

Normality has returned on the radar of people's interest, following the critically-acclaimed release of Joker. Joaquin Phoenix's raw performance shifted the viewers' attention to the difficulties in understanding normality. It also demonstrated that reality is subjective. I think that discussing the meaning of human normality is extremely relevant at the moment.

This post will explore the thin line between normality and abnormality, discussing the factors that might influence the judgments of human normality.

To a large extent, normality depends on societal norms and strict structures, controlling how individuals should think and behave. These strict structures are established to ensure that society functions smoothly and efficiently.

While societal norms are employed mainly to maintain "correct" behaviour and the goodness of its citizens, it could be argued that being ruled by societal expectations can create a society filled with fearful sheep.

Naturally, every single behaviour that deviates from societal norms could be perceived as abnormal. According to the DSM5 diagnostic guidelines, mental disorders are also concerned with the “deviation from the norm”.

It makes me wonder whether we are wired to reject ideas, thoughts and behaviour that opposes the norm. Naturally, people don't like to be wrong, so there is a great problem with judging whether someone is normal or not.

Often we are not even aware of the influence that societal norms have on our normality judgments. For instance, individuals who experience significant growth in their thinking patterns, who reject the common world perceptions held by the group, tend to be perceived as slightly odd.

Being sane in insane places

Although the pseudopatients behaved in ordinary ways, psychiatrists failed to discover that they are healthy individuals in an "insane" place.

Rosenhan concludes in his paper: "It is clear that we cannot distinguish the sane from the insane in psychiatric hospitals. The hospital itself imposes a special environment in which the meaning of behaviour can easily be misunderstood".

The role of familiarity on perceiving normality

Normality is often described as something that is consistent with common behaviour. So, familiarity could have an impact on what we judge as normal. I think consistency can be also applied to thoughts, values, and feelings.

For example, you could live your life consistently thinking negative thoughts about yourself. You will not question whether your thoughts are normal or not because it is something that you are used to. It makes even more difficult to make these judgments when you live in a chaotic environment.

That's why being constantly challenged and questioned on the way that you think can be beneficial (but that's a topic in itself for another blog post :) ).

The role of subjective perceptions on understanding normality

So like I said before, people's experiences of the world are subjective. There are things that we can objectively measure and test, however it is impossible to examine the objectivity of the way we perceive everything around us. If we perceive something as normal, it does not mean that our judgments are actually correct.

I think when it comes to judging whether someone or something is normal or abnormal, you need to be aware of your subjective bias.


Overall, judging what makes someone normal is difficult because judgments of normality are influenced by numerous factors. There is a thin line between normality and abnormality, and it is maintained mostly by societal norms, environment, familiarity, and subjective perceptions.

Stating whether someone (or something) is normal or abnormal is not as easy as figuring out whether lemons are yellow or bright red. Try not to fall victim to societal norms, learn to celebrate individual thoughts and differences. Actively assess the limitations of your subjective thoughts, that will help you progress as an individual.

"What does it mean to be normal?" well, I guess it's up to you to decide. 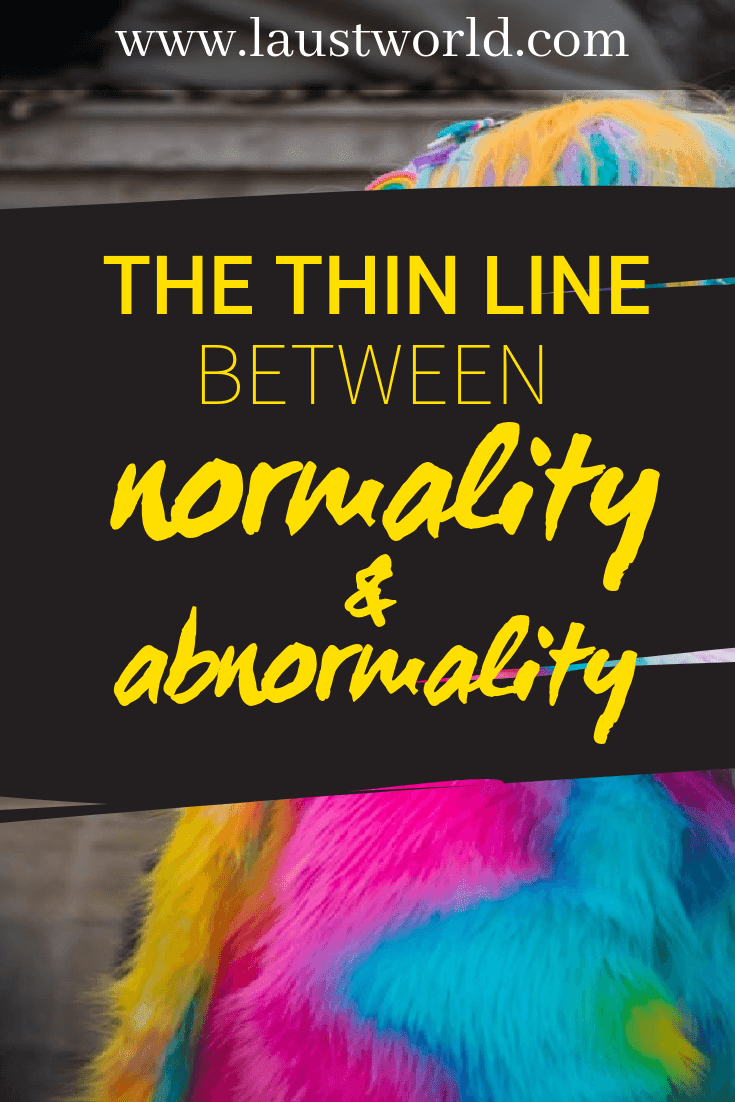