Blind to our own blindness: 10 cognitive biases that cloud your judgments and decisions

Have you ever thought about why you make certain decisions? Do you ever stop to think about how your judgment was made? If you have not paid attention to your judgments, you are not the only one.

Psychology researchers have gathered a vast amount of evidence on cognitive biases that play a great role in clouding people's judgments. We are wired to make judgmental mistakes. We are wired to be ignorant. One of the greatest figures in judgment research, Daniel Kahneman once said: "We can be blind to the obvious, and we are also blind to our blindness.".

This means that our judgments and perceptions of reality are extremely flawed. For instance, we rely on limited information to make decisions, but that's not all, there are plenty of other biases!

I'm guilty about being biased in my judgments myself, like most people I tend to be preoccupied with the belief that my judgments reflect complete accuracy. After all, although we are thinking creatures able to grasp that we are alive and that we have consciousness, we are wired to make quick decisions based on poor evidence.

In this post, I will describe 10 cognitive biases that can cloud your judgments. I will explore useful psychological research and theories to enhance your understanding of these cognitive biases and decision-making processes.

How do we make judgments?

The dual-process model of decision making

Before I break down some of the common judgment biases, it is important to consider how we make judgments and decisions.

The dual-processing model proposes that two systems are employed in decision making, system 1 is intuitive, affective system. Think of it as a quick, rapid response based on limited evidence. It is your "jumping to conclusions" system.

In contrast, system 2 uses a more analytical processing approach. This means that your reasoning is based in system 2. System 2 is all about applying different models, concepts, and experiences in order to make deliberate decisions.

The usage of these systems often depends on the situation itself. Nevertheless, system 1 and system 2 can often work in a collaborate fashion as well, where one system informs the other about relevant information.

Although it is proposed that system 1 leads to inaccurate judgments, I believe that system imbalance can also lead to bias. For instance, over-active system 1, may result in judgments that are purely based on intuition. Imbalance in system 2 would give rise to "cold" judgments lacking an emotional nuance.

As you can see, the processes underlying your judgments are quite dynamic. Unfortunately, these dynamic processes can be influenced by judgmental biases and even your emotional state.


What are the common judgment biases?

The halo effect is all about making judgmental generalisations about people. It affects how we make impressions and leads to critical evaluation errors.

Physical appearance is a fundamental aspect of halo effect. It is said that the halo effect follows the "what is beautiful is good principle" where attractive individuals are rated more favourably on unrelated traits (Dion, Berschheid & Walster, 1972). This means that the halo effect can lead to a dangerous ignorance of person's flaws.

In fact, this is what research has found. Observers tend to forget the influence of the situation - the quizmaster has an unfair advantage over the contestant, the quizmaster knows the answers to questions.

This is not due to the quizmasters' personal intelligence, he simply appears to be more intelligent in that specific situation (Ross, Amabile & Steinmetz, 1977). That's the nature of the game!

In your lunch break, you happen to read an article about increasing road accidents. On your drive back home, you feel anxious as your mind automatically begins to overestimate the likelihood of getting involved in a car accident.

The availability bias relates to making presumptions about situations based on previous readily available knowledge.

In the crash scenario, you are overestimating the car accident likelihood, as the evidence about increasing road accidents pops into your mind. This means that availability bias is key in how people judge risk. The availability bias leads your mind to take shortcuts, it can blind you to other relevant information.

Anchoring bias is when your decisions and judgments are reliant on previously presented information. This is when initial information frames your mindset, it is a common concept in financial literature.

Your brain is naturally attuned to negativity, this means that you perceive things with a negative nature as more influential compared to positive things. Negativity bias can also influence your memory. You are far more likely to remember negative situations rather than positive ones.

The existence of negativity bias is supported by neuroimaging evidence. Research shows that presenting negative stimuli leads to a surge of electrical activity in certain regions of the brain. Negativity bias has an evolutionary basis, as it was vital for us to quickly respond to threats in order to maintain survival of our species.

After an event has occurred, it is common for people to exaggerate their ability in predicting the likelihood of that event.

The hindsight bias is all about your overconfidence, it is when you experience the moment of "Ah! I knew it all along!". When you are unaware of the events' outcome, your predictability judgments are far less certain.

The framing effect is when your judgments are influenced by the way the options are presented to you or in other words "framed".

The framing effect is often used by the media to portray specific messages. It's all about presenting options in either a negative or positive light.

Groupthink is one of the most dangerous cognitive distortions that you can experience. It is a phenomenon in which you strive to achieve the consensus in the group and adopt the so-called "shared group view"  even if you don't agree with that view.

You choose to support the common group perspective and reject your own personal beliefs. Groupthink can be amplified by group cohesiveness and the need to make difficult decisions.

This cognitive bias is problematic because it can result in diminished questioning of group beliefs. The Challenger shuttle disaster is a famous example of groupthink effect.

Confirmation bias occurs when you would like a certain idea to be true, and your mind begins to actively attend to information that is confirmatory of that idea. As a result, you get blinded to other possible alternatives.

Confirmation bias can lead to prejudices in your judgment process, it can greatly affect how we perceive other individuals.

For instance, if you wish to believe that you have a wonderful friend, you will absorb information that supports this perspective of your friend. In contrast, you will reject all evidence that supports your friends' nastiness. Confirmation bias leads to diminished judgment objectivity.

While not exactly unconscious, self-serving bias can still cloud your judgments. It is all about attributing positive factors to your own individual characteristics and negative situations to external circumstances.

For example, if you got a good grade in an exam, you would attribute it to your ability. On the other hand, if you got a low mark, you would be likely to judge the situation or external factors, for instance, the quality of teaching, as having caused your low grade.

Self-serving bias is all about wanting to protect your sense of self-esteem.

Use this as a way of learning from your limitations. Try not to deny your biases and imperfections for the sake of coming across as a perfect individual.

Most importantly, I hope that this will lead you to realise that there is no truth in life. Everyone perceives and judges their truth through a personal, subjective lens. Strive to be as rational as you can, when you make decisions. 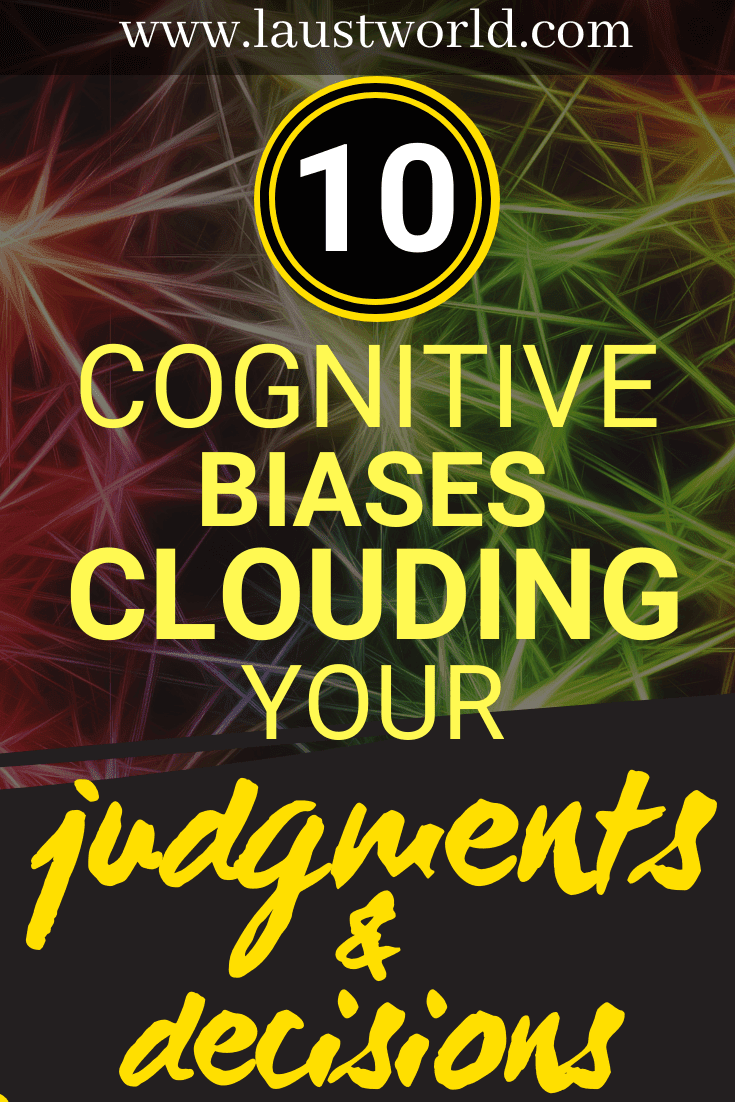